Peeps Gettin’ Their Con On

We came up with the Con*Quest Adventure Journal™ from going to cons with our t-shirt brand, One Less Nemesis. I had a file folder in my office of all of my photo ops from the cons I had been to and plastic bags shoved in my bottom desk drawer full of business cards and stickers that I had gathered along the way. The closest thing to journaling or scarpbooking I had ever done was a Smashbook. It was perfect for my life because I just wanted something that I could easily stick stuff in, without worrying about page layouts and intense design. I could literally take the ticket from my daughter’s performance and stick it to a page in the Smashbook – so simple for me! That’s really what I want this journal to be. Simple.

The journal can be used in any way that works for you. Buy it for one big show and fill it up. Buy it for all of your shows and build it up over time, move the pages around, or add to it. There is no right or wrong way to journal your con. To give you some ideas and inspiration, I’d like to share some of our own journal pages along with pages from some of the amazing people we’ve met along the way who have shared their journal pages with us. One of the most touching experiences we’ve had is when Tammy Huff messaged us. Her son Justin is nonverbal and starting going to cons recently. He really had no way to communicate to his friends about his con fun, but with our journal, he and Tammy were able to capture all of that magic on the pages and show people the amazing con experiences he was having. Thank you especially to Tammy for sharing this with us and thank you to everyone who contributed their own journal pages! 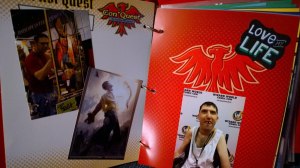 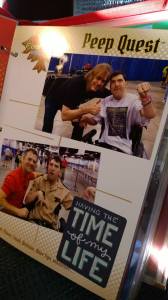 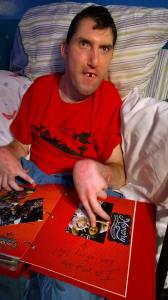 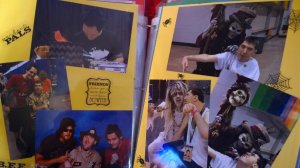 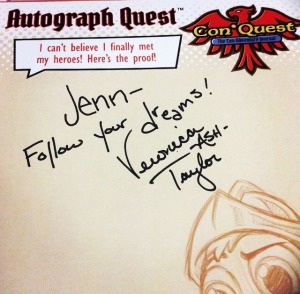 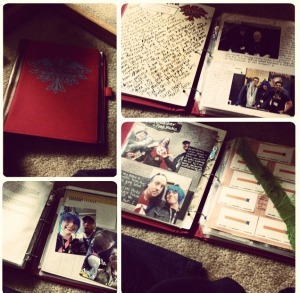 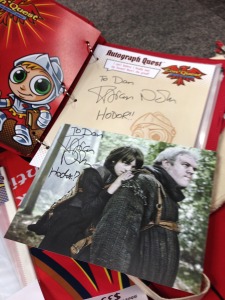 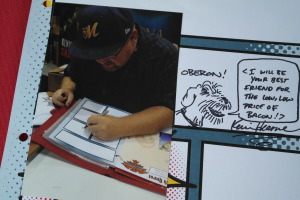 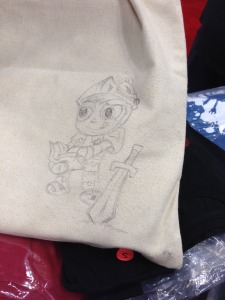 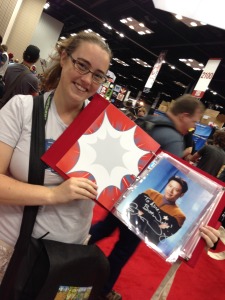 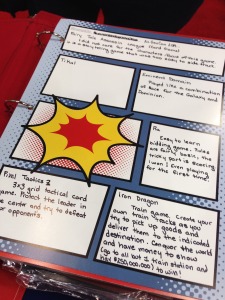 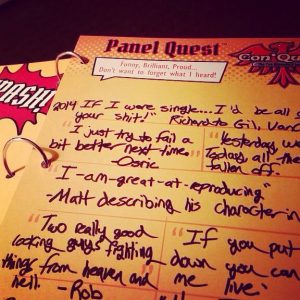 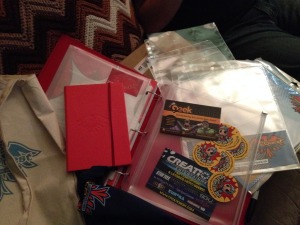 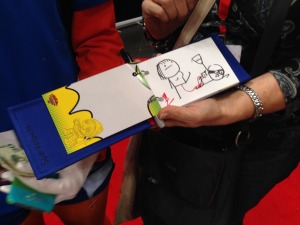 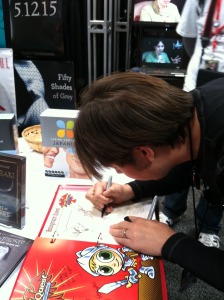 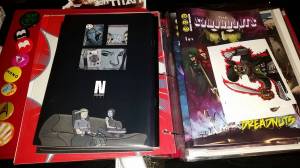 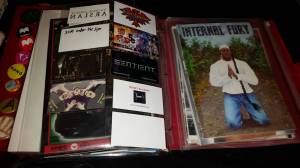 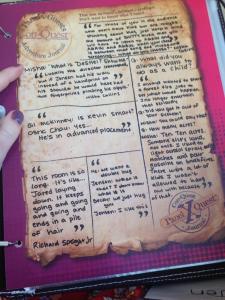 Written by Shelley Harper on October 6, 2014. Posted in NYCC, Uncategorized

We leave tomorrow for New York Comic Con and will be setting up and getting ready to meet all of our Kickstarter backers and our preorder customers plus all of the awesome new people we hope will come by booth 2770 to check out our stuff! We have a new booth display that we are SO excited about, so even though we are in the far back, you will hopefully recognize us when you get there! 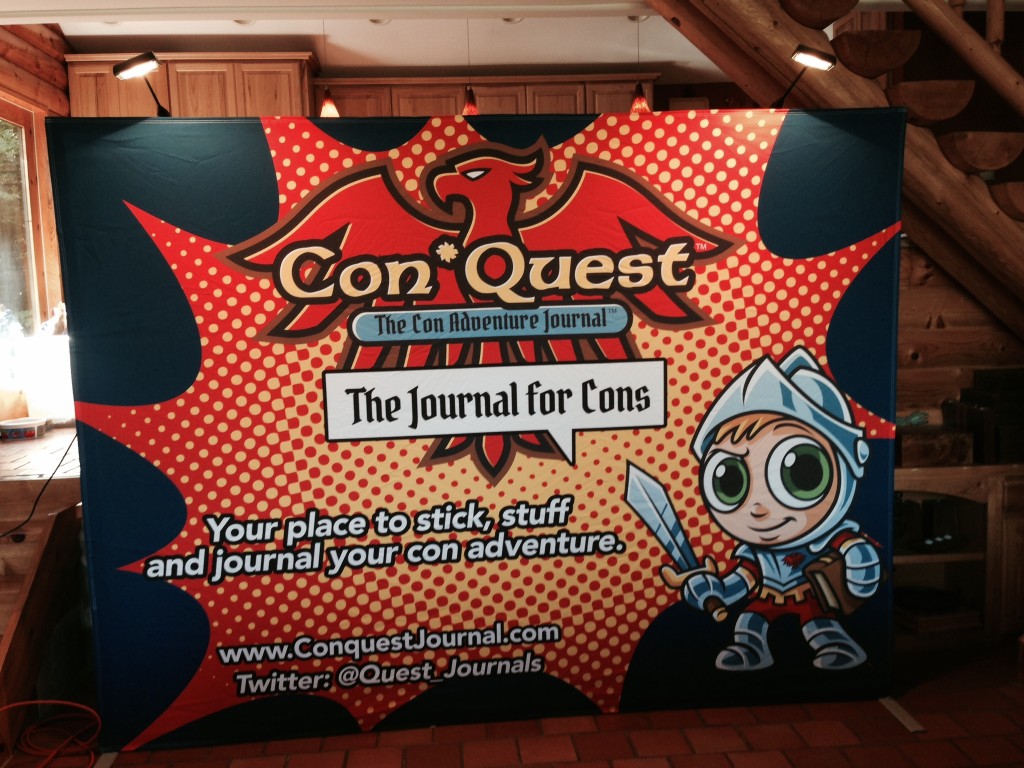 Don’t forget to come by early to get our NYCC 2014 Show Exclusive Pin!

They  are $5 when you buy a journal, $7 on their own. We only have 200 of them, so they will go fast! You can pin them to the binding on your journal or tote bag to signify that all of your NYCC goodness is inside your journal. 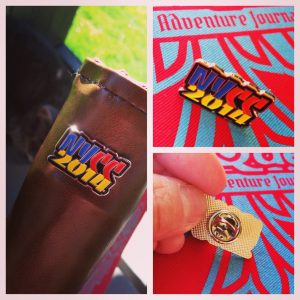 The Con*Quest Adventure Journal™ is the perfect place to store all of your artwork, photo-ops and autographs.

I have signed up to get my picture with Stephen Amell aka Arrow, so I’m pretty excited to add him to my journal! 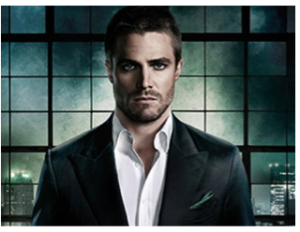 We are so excited to test new merchandise exclusively at New York Comic Con.

With our manufacturing partner, we have developed three new products that we think you will love and that will add a really special vibe to the whole show: Con*Pliment Cards™, Con*Panion Note Cards™ and Con*Panion Mini Journals! I think we are most excited about the Con*Pliment Cards, which are business sized cards with con specific compliments that you can pass out to awesome people you meet. There’s a line on the back to include your contact info, but you don’t have to do that. You can just give fellow attendees a Con*Pliment just to spread kindness and fun. We’re only bringing about 25 sets of each, so if you want to get some of our newest stuff, get to our booth 2770 early! Watch our Twitter and Facebook, I’ll reveal the new stuff online as soon as we have it in our hands.

We can’t wait to see you all at NYCC!

Written by Shelley Harper on July 28, 2014. Posted in Uncategorized

We’re 76% funded with 51 hours to go! Please tell everyone you know and share this link: http://kck.st/1ryTj7m. Help us get through this last push! Even if you don’t go to cons, you may have friends who do! Plus it would be a great gift 🙂

Thanks so much for the support!

Written by Shelley Harper on July 21, 2014. Posted in Uncategorized

As a creator on Kickstarter during the now infamous Potato Salad Kickstarter, at first I was completely annoyed (as I’m sure many were) by the sheer news coverage and just the amount of money being thrown at a guy who was making potato salad. People were supporting a guy who was not even offering a valid reward! Infuriating!

But wait a minute, my public relations mind said. There are many people who, prior to this potato salad, had no idea what Kickstarter was. I know this because when I have explained to acquaintances and friends outside of my comic-con world that I launched a Kickstarter, they had no idea what I was referring to. Then I realized the magic. Potato salad has put Kickstarter in the forefront of the media, even more so now than before. And with that, came the idea for a quick video response and the headline: Better than potato salad – a comic-con journal Kickstarter.

Written by Shelley Harper on July 9, 2014. Posted in Uncategorized

We love Gen Con and had the most awesome show last year as first time exhibitors! This year we are excited to bring our Con*Quest Adventure Journals to the show for the very first time. So we created a Gen Con reward level on our Kickstarter! Pledge $30 or more and you get a journal and bag, for easy pick up at the show in our One Less Nemesis booth 1954! Due to popular demand, we added 100 more journals to this reward! Check it out and pledge if you can, we’d love for you to have a journal to capture every single moment of Gen Con, August 14-17 at the Indiana Convention Center!