Written by Shelley Harper on February 23, 2015. Posted in Webseries

How do we get all of that crap in our booth? What does the show floor look like before we set up? Where do we eat and why do we gain 10 pounds in Portland?? (we’re looking at you, Killer Burger)

Answers to these burning questions and more are answered in the latest installment of our Quest of a Con Vendor webseries. I bring you episode 2 of 2015: Portland Comic Con.

Con*Quest How to: Artist Quest

Written by Shelley Harper on February 19, 2015. Posted in comicon

Take advantage of the fantastic comic and design artists in Artist Alley at pretty much every comic con. Take your journal to one of their tables and ask them to draw an original piece in your book (usually a very nominal fee). Or you can buy one of their small pieces of art, have them autograph the page and stick the art and photo them next to it. This creates your own, one-of-a-kind collectible that no one else will have. Here’s my quick video:

What’s with the new journal? 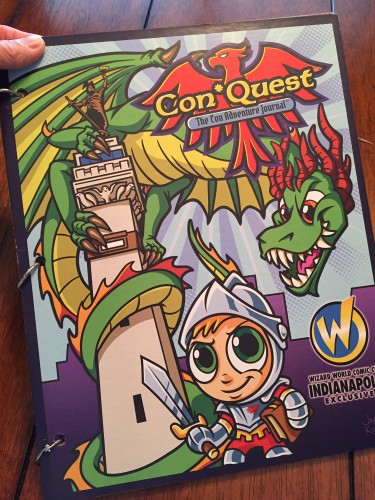 I love this journal! We are so excited to launch our new show exclusive variant cover journals. Taking inspiration from the ongoing tradition of comics to create a show exclusive variant cover issue for each comic con, our fantastic artist, James Koenig, has put Questly with a dragon wrapped around the Soldiers’ and Sailors’ Monument on the cover of our Wizard World Indianapolis Con*Quest Journal. This new journal is only $25 and is available for pre-order to pick up in the booth HERE. 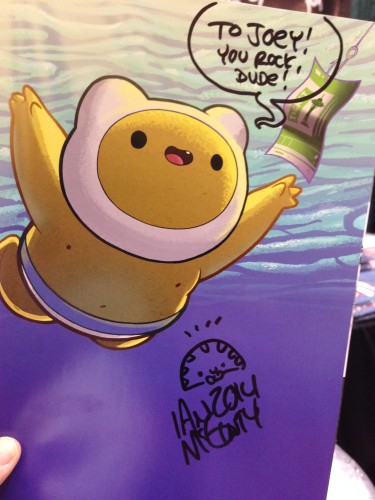 I wanted to share why we are trying this new journal. Our very first idea for the journal back in January 2014 was that it would be a city and show specific book, celebrating the event and becoming not only a place to stick your con stuff, but also a collectible of it’s own. 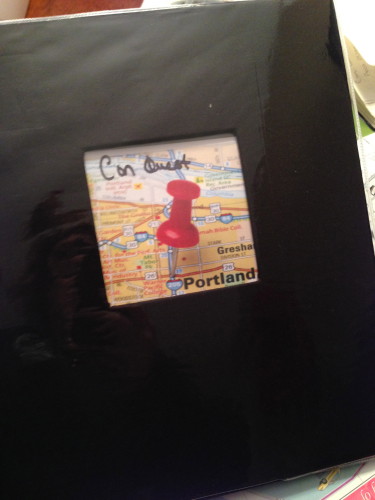 Our very first, very rough mock-up of the Con*Quest Journal

When we began working with our manufacturer, we realized that to produce small dated quantities with that specific show would be cost prohibitive. So we designed our red canvas journal to be our deluxe version, one that was big enough, with enough pages for a big con or for several small cons. But our dream to make a collectible show journal was always there.

We vended at several shows in 2014 and 100% of the people we talked to said “What a great idea!” when we explained what the journal was. This was great feedback and we are so proud of how far we came in one year.

We also knew it was time to take the business to the next level. While vending a shows, we knew that attendees loved show exclusives. They waited in line for them, pre-ordered them and proudly showed them off. We also realized that some people might be prefer to have the option of a slimmer book at a lower price point.

That’s why we are working now to add a new journal to our lineup. We think the variant cover show exclusives are the perfect addition! We want to have custom art created for each convention and release the art when they are made available for pre-order. We want to create something so unique, that each year attendees will be watching to see what the new design will look like and then add it to their shelf of Con*Quest Journals. We want to be one of the first booths that people visit to pick up their new journal.

We are testing this out at Wizard World Indianapolis and plan to keep going with it for Supernatural, WonderCon, C2E2 and the other shows on our schedule. Keep an eye out for the new cover art and if you’re going to show, preorder one or just stop by our booth. If you have suggestions on things you’d like to see in the journal, please share! We love to talk about how we can keep making it better and better.

Thanks for the support and remember to Journal Your Con!

Our Interview with the Associated Press

Written by Shelley Harper on December 17, 2014. Posted in Kickstarter, NYCC

When you are in the midst of the intense and crazed days of a Kickstarter, where your wrists and fingers hurt from all of the computer time spent emailing and well, begging, for some attention, you dream of being a Staff Pick. And you dream that the Associated Press will notice you and interview you. Right? These things did not happen simultaneously but THEY HAPPENED. A few months after our Kickstarter successfully funded, we were getting ready for New York Comic Con. We have our Con*Quest Adventure Journals to take for the first time, so awesome new accessories that our manufacturer pulled off at the last minute and a LOT OF Kickstarter backers who were picking up their journals at the show.

Out of the blue, Joseph Pisani, Big Story business reporter, contacted me to talk about being chosen as a Kickstarter Staff Pick. Then there was this whole thing where a photographer came to our booth at New York Comic Con and took some pictures on the one day I was manning the booth solo. And today the story came out! So here it is, in all it’s fantastic glory. 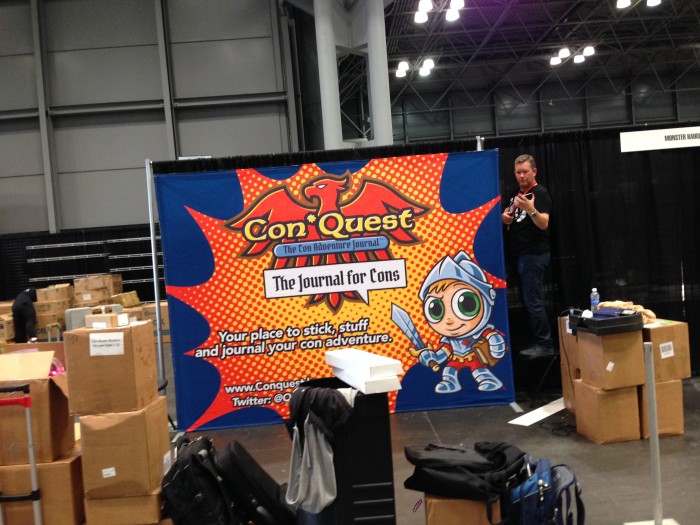 Written by Shelley Harper on October 23, 2014. Posted in Webseries

We have often googled, searched, scoured and generally researched ourselves into a frenzy to find the most efficient ways to vend at cons. There is just not a lot of information sharing going on here! And it’s not that we’ve figured it all out yet either. Every single show brings us a whole new set of challenges, regardless of how prepared we are or how many times we’ve done that show. I started recording a little bit of what it is like for us when we’re setting up and working a show. With each show we do, I’ll try to get more video of how we get ready and how each con has it’s very own flavor. Hope you like our first installment of Quest of a Con Vendor!